“Do you want to sue the commonwealth over gerrymandering?”  That was the question a friend posed in August of 2017.  “Sign me up,” I replied.  Thus began my small role in a momentous legal and political saga still unfolding. Since the PA Supreme Court’s historic ruling that the 2011 maps were unconstitutional, dozens of people want to thank me, to congratulate me. At first, I tried to deflect attention from me.  “I am just a not-very-pretty face of a bigger win” was my quip. My fellow citizens were having nothing of it.  They pump my hand and look me in the eye and there I see reflected joy in a win for democracy and hope that progress can be made. 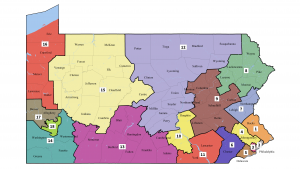 I am a proud member of the League of Women Voters- the League. It is political, but non-partisan.  Non-partisan does not mean demure nor pacific. Fighting for the best democracy we can have pits the League against entrenched powers on the left and right.  Much of what we take as normal in our American experience, women voting, direct election of senators, voting protections for racial minorities, are only the norm today after yesterday’s struggles. The fight to end gerrymandering is a normal extension of the yes, political, but non-partisan mission of the League.

My own part in this story picks up last November when I entered an antiseptically non-descript law office near Harrisburg for a deposition.  A deposition is usually ranked as somewhere near a root canal for unpleasantness.  But, in this case, I was excited.  Attorneys for the respondents- the legislative and executive branches of the commonwealth- were going to ask me questions about my experiences in the 10th congressional district and gerrymandering.  The best part: they had to listen to and write down every word I said.  Finally!  I had a captive audience to listen to me rail about gerrymandering and its damaging effects on good government and faith in democracy.

The attorney asked me if I had been involved in politics and campaigns.  “In my life?” I asked.  “Yes,” he said.  Several pages later, I wrapped up reciting volunteering for different campaigns since 1990. He asked me if I agreed with our claim in our brief that gerrymandering is harmful.  “Yes, “ I began. “It starts I think with De Tocqueville’s analysis in Democracy in America.” He rolled his eyes.  81 pages later, we were done.  My testimony was then included in the record submitted to Commonwealth Court Judge Brobson in December and ultimately the PA Supreme Court in January.

Three points came across most strongly in my testimony.  Frist, when there is partisan gerrymandering, the districts can often make normal advocacy and petitioning our government less efficient.  In the 10th, with Northumberland county split off from Union and Snyder, any efforts of the local leaders to advocate on behalf of our common interests are that much more complicated than if Northumberland, Union and Snyder were included.   Second, the lack of competitive elections means that for any incumbent, whether Republican or Democratic, the incentive to be responsive to one’s own constituents evaporates.  This is the heart of the criticism that the politicians are picking who they represent instead of the other way around. Finally, across our commonwealth, under gerrymandering, we are all likely to doubt that representatives are responsive.  Much of our democracy is not just the “org chart” laid out in constitutions, but it is as much our collective faith in our institutions.  When those norms are eroded the damage to our collective faith in democracy is difficult to recover.

The Supreme Court’s ruling in LOWV v Commwealth is a clarion call that we can have a better democracy.  I and my fellow petitioners needed to sue as a class of people, as voters who regularly vote for Democratic candidates, to show that the partisan intent of the 2011 map was done to harm us as a class of people.  Sadly, much of the Republican leadership is trying to argue that this remedy is itself yet another partisan gerrymander.  Of course drawing the map without the intent to favor Republicans will lead to many more competitive elections.  But intent is everything. Falsely smearing the remedy as yet another gerrymander invites us all to abandon any hope that our government can create the systems that call forth our better angels.  I encourage us all to reject such a cynical and self-defeating logic.

About the Author: jordi